Many people believe the display on the 12,9" iPad Pro will be as good as OLED displays because of the mini LED backlight.

Apple gave amazing contrasts numbers explainig that with mini leds, dark zones of the screen will be perfectly dark thanks to the 2596 zones that can be shut off it the image is black in this zone.

Alas, these figures are a bit of a lie for the simple reason that 2596 zones makes a definition of roughly 40 x 60 zones on the full screen. You will get better contrast but ruin your picture with BLOOMING.

There will be 2155 pixels controlled by only one backlight zone.

Let’s take a simple example, a white triangle on a black background 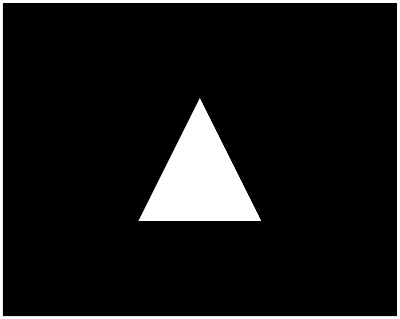 At the high definition of the LCD panel, the triangle will be nicely detailed but there will be halos around it because the backlight will be a mosaic of big bright tiles behind the LCD panel. The backlight zones cannot match the actual picture because they are way too large.

To reduce this disturbing effect, the backlight will probably be managed in a more subtle way, darkening a bit the bright zones near the triangle edge to make the trick less obvious. But it won’t be clean and true to the real image displayed. There still will be halos and the shape won’t be as sharp.

This is a well known trick used by TV manufacturer to try to get a better contrast with LCD panels. And it is well known to have huge drawbacks too. Like blooming on subtitles in dark scenes.

We can hope that Apple will manage this system as well as possible but there are technical limitations and mini LEDs won’t be good until they get so small they become micro LEDs and match the pixels size.

THIS IS NOT GOOD FOR PROFESSIONAL IMAGE EDITING

Actually I will probably avoid the 12,9" iPad pro for the simple reason that I need my display to be as good and neutral as possible for work and not being sure the halo I see is really in the picture or caused by the backlight local dimming would ruin my work.

One thing is sure : I’d rather have a not perfect black than any halo caused by the dynamic backlight system.

So, don’t be overhyped by the iPad Pro 12,9" mini LED backlight, it’s just an evolution of a well known trick to make people believe the contrast of a LCD display is as good as on an OLED.